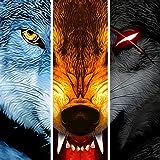 Previous Totally FREE Things That You Can Sell to Make Money on eBay Reviews
Next Life 3.0: Being Human in the Age of Artificial Intelligence